Rather than spending this class period focusing on close observations of works of art, as they are learning to do, the Teen Docents were able to go in-depth with four members of the American Folk Art Museum community to learn about various museum careers.

Hope Bodwell, manager of special events; Tanya Heinrich, director of publications; and Dr. Anne-Imelda Radice, the museum’s executive director, joined the teens around a table to share the ins and outs of their daily responsibilities and the paths they took to their current positions.

Hope Bodwell discussed how the skills she learned through her past experiences as a ceramics major in college, a corporate interior designer, and a library director came together at the American Folk Art Museum, where she manages special events, takes care of third-party space rentals, coordinates the volunteers, and runs the exciting “Make-It Thursday” program, in which local artists and crafts people conduct workshops for participants on everything from jewelry-making to embroidery. The students appreciated her candidness and humor.

Tanya Heinrich’s first job in New York City was in the American Folk Art Museum’s shop. She fell in love with folk art, and through hard work, long hours, and on-the-job training, eventually was able to move up into her current position where she is in charge of ensuring the quality of all of the museum’s printed material, including wall text, flyers, catalogs, the website, and this very blog! She spoke about how radically technology has changed since she began her career, when everyone used typewriters, and how important it is to anticipate change. The students admired her ability to manage her time effectively.

Executive Director Dr. Anne-Imelda Radice shared her impressive history with the students. Although she has been appointed to national positions by the likes of President Obama, perhaps the most gripping story she told was about arriving for her first curatorial job to find it given away. She was told not to worry because there were other jobs at the museum “girls could do,” such as being a secretary or receptionist. Not satisfied with these options, she took a job with the Sears Catalog instead. The women she met in her position at Sears, who felt that museums weren’t for people like them, inspired her lifelong dedication to making museums accessible. About this issue, she said, “What difference does it make if you can’t excite people?” She told the Teen Docents how important their job was in bringing their peers into the museum and thanked them for being a part of the American Folk Art Museum community.

Finally, the Teen Docents had an abbreviated, but inspiring, introduction to the Women’s Studies exhibition with Curator Emerita Lee Kogan. She spoke about how the four artists in the show expressed fantasy in their work. The students were drawn to her enthusiasm and ability to engage them in lively conversation about the art.

On Day 5, the Teen Docents went on a field trip a few blocks away to a neighboring museum—the Museum of Biblical Art. MoBiA displays art inspired by the Bible and its cultural legacy, and the students toured their current exhibition Ashé to Amen: African Americans and Biblical Imagery. Included in the show are three works from the American Folk Art Museum’s collection. Ashé, a Yoruba word that evokes the creative power of an artist to make something happen, and “amen,” a biblical religious affirmation, were central concepts as students explored pieces made by African American artists.

The exhibition includes themes such as Religious Landscapes and Faith, and through these themes, students learned about how these artworks can demonstrate cross-cultural influences. They were particularly inspired by Xenobia Bailey’s Sistah Paradise’s Great Walls of Fire Revival Tent. They came up with complex interpretations, and the piece reminded students of dragons, crochet scarves, and cups of tea.

After the tour, the students had the opportunity to choose their own themes and three objects that represented their ideas. They began by observing objects throughout the rest of MoBiA’s exhibition, and afterward, they presented their selections to the class. Some of their themes included Freedom, the Pathway to Jesus and Mary, Destiny, and Who Are We?

The Teen Docents’ presentations gave us all new perspectives on how to view these artworks, and they had enthusiastic and insightful interpretations that sparked curiosity in all of us!

The Teen Docent’s last class before Spring Break was a busy one! Students were first set free in the galleries to work on “adopting an object.” Over the three months the students spend here at the museum, they compile in-depth research on works of art that resonate with them the most. While ordinarily museum visitors spend on average fewer than 30 seconds viewing a work of art, the Teen Docents are asked to stretch their powers of observation to consider multiple aspects of an artwork—to really spend time with it to uncover layers of meaning. “Adopting” an object requires thoroughly considering and recording details such as background information, provenance, and time period. Students also answer questions such as, “How would you describe the object to someone who could not see it?” Students think about what questions they would pose to the artist if they could….

During the second half of class, the group did have a chance to ask questions directly of an artist whose work is in the museum’s collection! Students were visited by Drunell Levinson, whose piece Baby Blanket has been in the collection since 1998.

During her talk, Levinson, who revealed that she identifies specifically as “an artist who makes quilts,” discussed how she likes to subvert the idea of what a quilt is or can be—that combining traditional techniques (incorporating three layers—backing, batting, and quilt top) with an unexpected, unorthodox element (materials such as fishing lures or condoms) allows her to re-imagine possibilities in art making.

As students extrapolated meaning from each example of Levinson’s work, she shared her belief that art—the object itself—comes alive most when viewers’ interpretations are exchanged, extending the conversation that the artist begins.

Some other topics covered: the role of censorship in the art world (and in the world at large), the social aspects of quilt making, quilt making as a performative act, and geometry as a source of infinite inspiration.

Many thanks to the artist for stopping by the museum to share her practice with us!

On the first day of the semester, the Teen Docents discussed a significant work of art that is on long-term loan here at the American Folk Art Museum: THE PEACEABLE KINGDOM by Edward Hicks. At least sixty-one other versions on this theme by the artist, who was trained as an ornamental painter, have been identified so far. Three of these paintings are on view currently at the Yale Art Gallery. 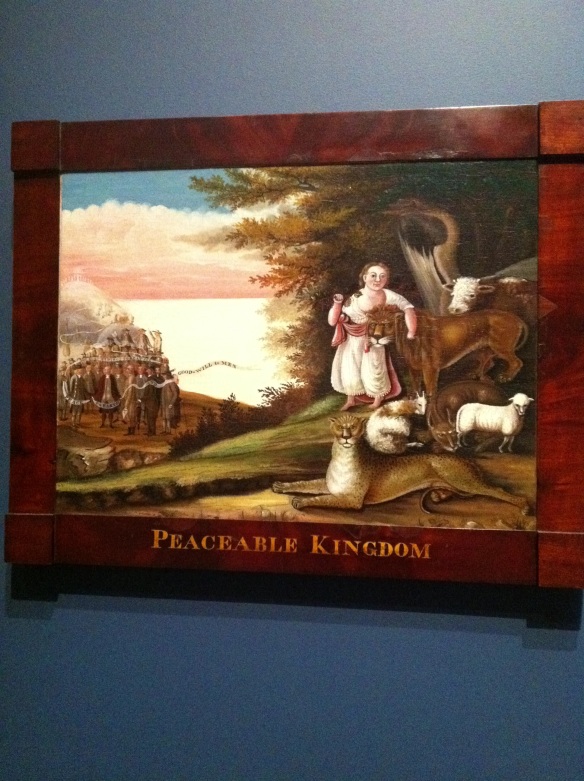